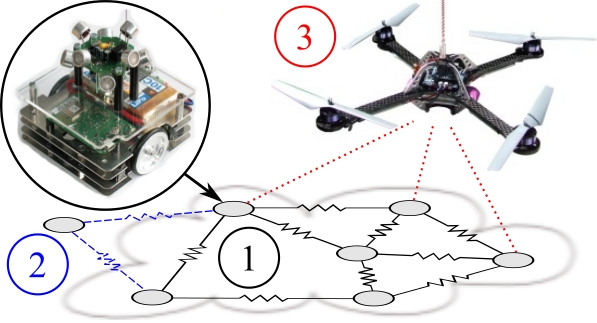 Wireless Sensor and Actor Networks (WSANs) consisting of mobile and fully autonomous nodes are meant to operate in known as well as in unknown environments. The lack of position information to coordinate sensor and actor nodes in unknown environments is still a challenging task. A large variety of WSANs applications rely on accurate position information and can not operate unless nodes know where they are. It is therefore essential to provide sensors with this knowledge, typically by the usage of a localization system. Because of the limited availability in indoor environments and the potentially too low accuracy, GPS can not always be used, requiring the usage of a Local Positioning System (LPS). These systems have attracted the attention of many research groups, however, there is still no commonly accepted system available. The greatest challenge for a general purpose LPS is its autonomous initialization or bootstrapping in unknown environments. Furthermore, to not limit the range of applications, manual interaction or the existence of a central processing unit can not be assumed. Other important features are scalability, the ability to continuously adapt to changing environments, and the independence from a priori knowledge. None of the existing solutions fully feature all of these properties. We therefore developed the Autonomous Localization Framework (ALF) that provides localization support for truly self-organizing and distributed systems without relying on global knowledge. Based on simple distance measurements and radio communication, mobile ground robots strategically distribute themselves in a potentially unknown environment to subsequently form a reference grid in a fully decentralized and distributed manner. This reference grid can be seen as a global coordinate system enabling nodes to determine their position in relation to all other nodes. Our system clearly outperforms related approaches in terms of scalability, robustness, and accuracy. Furthermore, it is completely hardware independent and considers timing constraints. To backup these claims we showed that our system can enable the autonomous flight of a quadrotor based on positions obtained by ALF.